Too cool for school – That statement has just gotten a new sense. In the frame of a school project, four fellows and me have gotten the chance to be on the pursuit of the best beer of Salzburg.

Of course, the theory failed in the beginning, we were sure we will not have the time to visit all the bars and pubs in Salzburg. But a few we did, and despite of the fact we cannot say which is the best beer in Salzburg, we can give you some tips where to go out with your friend and enjoy a nice glass of drink. We have visited four places : Stiegl Brauwelt, Augustiner Bräu, Alchemiste Belge and Beffa Bar. All of these bars provide an exceptional authentic experience.

The first two bars are representing the traditional Austrian/German/ Bavarian culture. They are very similar, but to some extent they differ. 1492 was a great year in the human history, Columbus discovered America and the Stiegl Brauwelt has been mentioned first time in written form. Stiegl Brauwelt produces the very own beer of Salzburg. The location inside looks way more sophisticated than you would imagine a traditional brewery. In fact, the building includes a restaurant, the factory itself, a museum and a gift shop. We have been to the restaurant where we as well tasted differently flavored beers. We have gotten the impression that, they have a huge a variety and they also provide seasonal offers. We have visited the place just before Christmas and one of us has chosen the ‘christkindl beer’, it is a type of Christmas honey beer, which I suppose is only available at that time of the year. So, in case you want to visit the place, you might as well take more attention on what   time of the year you scheduling your visit. 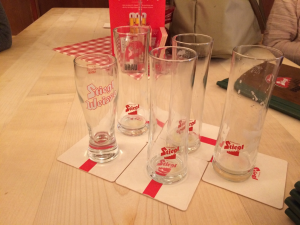 Very similar to Stiegl is the Augustiner brewery. The brewery is located in the Old Town of Salzburg and also has a long tradition. The brewery has been founded in 1621. Although, here the beer factory is as well  right next to the brewery itself, the product originally comes from Germany. The place is very special from inside. It does not have a restaurant in the traditional sense, but within the location there are a lot of stands that offer different kinds of street foods. Interestingly, in case you just cannot stand those meals, you also have the chance to take your own food to the place. No one will say a word  or give you judging looks. In fact, it is an usual thing there. Now about beer, the variety of beers here is poorer than in the earlier mentioned Stiegl brewery. However, you get a bigger portion for cheaper price. They mainly offer two types of beers: the stronger ‘bock’ beer and the milder ‘märzen’ beer. In case , it is still too strong for you, you also have the chance to mix those with different kinds of juices. Be prepared, it is generally self-service in Augustiner brewery but there are waiters going around, so if you do not want to leave your place, they are glad to serve you.

The Alchimiste Belge and the Beffa Bar are so similar to each other (in fact they are owned by the same person) I also will not separate them in my review. In both of the bars, they offer traditional Belgian beer. The variety is great and the atmosphere is authentic. These two bars (as I have seen) are generally fancied by the international youth. What all of us really liked (expect the coconut beer) was a wall of coasters in Beffa bar where you could leave a message. It can be anything; current thought, a quote about beer or your phone number, which of these you prefer.

All in all, we had a great time. Even if we did find the best beer in Salzburg, we certainly got some great experience. ( Lastly, just a little sneak peek, we have not find the best beer ourselves but we found a beer guide that told us that The Alchimiste Belge has won the title of ‘The Best Beer Bar’ in Austria in 2012 .)

So, thirsty for a beer yet?