In general, I think Flachau is a quite nice skiing region which offers a huge variety to the guests, also including different kinds of advantages and disadvantages.

Not only I, but also Melanie thought that it´s easily accessible from Salzburg and not very far from it. Flauchau itself consists of a real big amount of slopes of different levels but most of the pistes are not very suited for people with higher skills in skiing (and we two are such people!). The day we were there, unfortunately there was not much snow, but bless the modern technique, they were able to produce enough artificial snow. So not all possible skiing routes were open but I think we made the best out of it by looking for the most enjoyable ones!

However, in high season (begin of Christmas holidays) it is very crowded as well, we had to queue up in front of the lifts quite often. So during this time we just enjoyed the nice and sunny weather we had that day.

Midday, after some hours of skiing we trained our “Einkehrschwung” at a new and modern but still traditional hut – the Herzerlalm. I pampered my stomach with a delicious “Semmelkren” soup while Melanie got herself a “Bauernsalat” – a salad with potatoes, bacon and goat cheese. The food was awesome and the comfortable atmosphere made it hard to leave again. 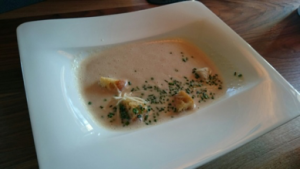 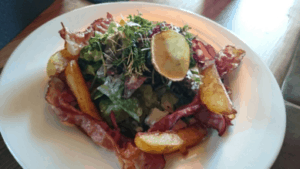 And also the weather was still kind with us and we took an extensive sun bath before we started again. 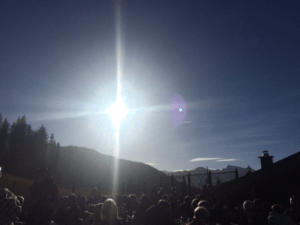 Later on, we completed our great day with some more sportive exercises. But I have to say that the slopes, especially in the lower parts were not in best shape anymore, I guess also because of the warm temperatures. 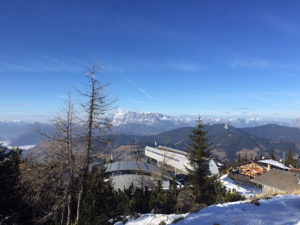 Until 15.00 we went up and down in the not-so-white mountain paradise of Flachau and then it was time for the second “Einkehrschwung” of the day (which we already had perfected)! Now we landed in the Hofstadl, the most famous Aprés Ski location of Flachau and some say even in the whole world! And I have to say that now I know why – we definitely enjoyed partying …:P

Check out our video!