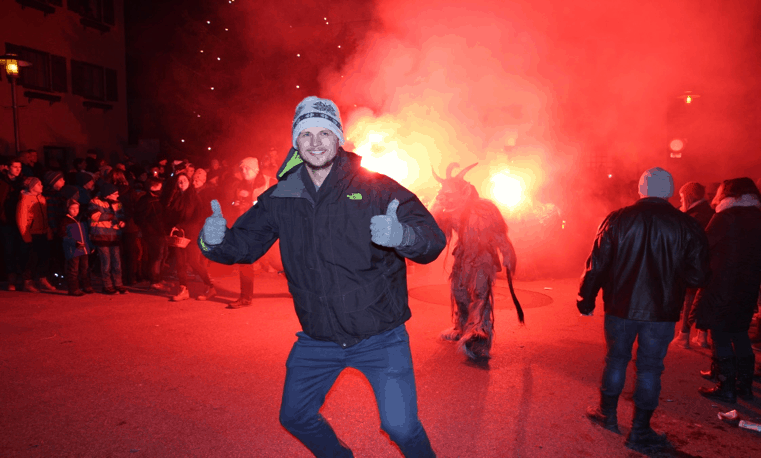 St. Leonhart struck us by surprise. The 5 of us were revelled with anticipation as it was our first Krampuslauf Run. Gluwein was in order, rain was in full effect and demons out to play. The Canadian Giant (me)  was most afraid of the mini gremlins as they smack and whacked their way down the street in gangs. Swedish girls were picked on as they seemed most innocent, and the large demonic creatures had the courage to hit them as they are known to tyrannize the pretty ones. Our Dutch and Swiss friends pretending they weren’t scared, but in actual fact they almost wet their jean trousers, which was a terrible choice of garment considering the hard Whip of the Goblins. It was an impressive sight that night, an hour long trip we never thought we would discover upon arrival in Austria. The first Krampuslauf wrapped our brains in fear, shadowing monsters lurking on us incomings, we now go home from St. Leonhart with adrenaline and scare. Looking onwards to the next village of horror we again are poor vulnerable humans in a Christmas daze, transformed to a tormented wonderland.

The experience has now grown into something more extreme. Some of us felt we were ready for it but we thought wrong. More interestingly, most of the Incomings decided to join the adventure of Krampus in Kuchl, which boosted our egos! We arrived and the streets were clear in anticipation, only children were running about, awaiting the nightmare. All of a sudden before our unguarded eyes we see rolling carriages, tractors, scouring sounds, and ferocious drunken beasts staggering down the streets.

Risks were taken here as it was our last chance to embrace the haunting spirit of Krampus. So being the ambitious idiot I’ am, I leaped out on the street standing in pose for a picture while the red torched Krampus creatures  crept towards me. My mind was taken back in time with feelings of a jittery childhood full of energy and ambition. These superior feelings instantly shot down by my mistaken graze of a Krampus demon beside me, I soon felt the pain locals warned me about. Cow tail stung my leg with welting pain, although it hurt like a mother of pearl I took it with grace and honour. I then thought to myself “Its Over, I have now conquered and endured the pain of Krampus”. I actually felt revived and uplifted after that whip to the leg, like I have been christened by the Krampus spirits and can move on with life in dignified fashion! 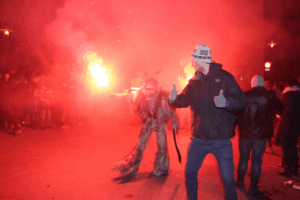 It is a scarier than Halloween.  How such horror walking the streets has affected our minds over last month.  We have lost countless hours of sleep with nightmares of Kramuslauf, and thoughts if Christmas will ever be the same again… Luckily Gluwein and Christmas market helped our morale over this time.

Sacred Tale of the Incomings

Krampus snuck up on us like most demons do.

We were not as prepared as we should have been with such torture to the mind and lashing to the shins. Once we tasted demons thirst of haunting Christmas cheer, we all wondered if we would only live in fear.

Krampus run we went, aimless in the head we only knew what we had read. Streets in anticipation, children beyond thrill, trampling towards us Shaggy demonic creatures of gremlin toil,  showing us innocent people the consequence of trespass on Krampus soil.

Fire in hand, Belly of Schnapps, Altered state of monstrous means, Salzburg no long was a place of tranquil scenes.

We are just innocent little incomings in search of something new, 5th of December our minds finally flew.

Traumatized in stun Kramuslauf what have you done!

Christmas took a big turn this year, and as we sat and drank copious amounts of Austrian Beer  in honour  of sleepless Nights…We were in ponder, as we move on and wander,

Krampus will forever scrape our souls to something New!…

Embellished we are as for now we await another year! Krampuslauf with revenge, all we can say is incomings are coming to a Village near you! 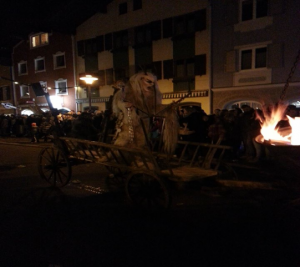 Set up a new salzburger lifestyle: 4 things you need for a carefree semester